In a year that celebrates the 50th anniversary of the Apollo 11 lunar landing and mankind’s first steps on the moon, U.S. explorers have once again brought home pieces of the moon for study- but this time from Antarctica, not Mare Tranquillitatis. Five meteorites, all pieces of a previously unknown lunar breccia (a sedimentary rock made of broken rock fragments), were recovered from an icefield in the Transantarctic Mountains of Antarctica. These discoveries also mark another important 50th anniversary—the first discovery of meteorite concentrations in Antarctica by Japan’s National Institute for Polar Research in late 1969. 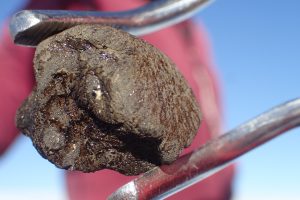 A piece of the lunar breccia held by teflon-tipped stainless steel tongs by the ANSMET 2018-19 field team.

The new meteorites were found by the 2018-19 U.S. Antarctic Search for Meteorites program (ANSMET) field team, led by Jim Karner at the University of Utah and Ralph Harvey at Case Western Reserve University. The lunar meteorites were recovered from icefields near the Dominion Range (DOM) of the Transantarctic Mountains, roughly 400 kilometers (250 miles) from the South Pole. The five samples total nearly 100 grams (0.22 pounds, the main mass of which is officially designated DOM 18666) and was one of 865 meteorites collected by ANSMET during the 2018-2019 austral summer.

Every December, Karner and a crew of eight volunteer meteorite hunters trek to Antarctica. Working in teams, they traverse the ice with snowmobiles for six weeks, looking for telltale characteristics of rocks that are not of this world. Meteorites, once found, are carefully collected, characterized and added to the catalog of samples available to planetary scientists.

“We actually found the first piece the very first day of searching,” says Karner, the ANSMET team science lead. “The rock was black with a greenish, translucent fusion crust, sticking out among the thousands of reddish, buff-colored terrestrial rocks in a glacial pile-up at the edge of the icefield. We knew immediately it was a meteoritic breccia, and we hoped, fingers-crossed, that it was from the moon.” Researchers at the Smithsonian Institution’s National Museum of Natural History, involved in classification of Antarctic finds, confirmed the mineralogy and texture of the meteorite are unmistakably lunar. The new specimens bring the total of lunar breccias made of basalt, a volcanic rock, in the U.S. Antarctic meteorite collection to nine, with others being recovered in 1987, 1994, 1996 and 2001. 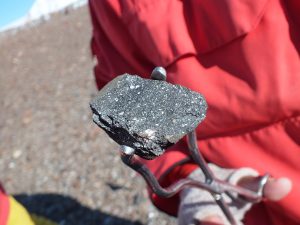 A piece of the lunar breccia held by teflon-tipped stainless steel tongs by the ANSMET 2018-19 field team.

Like the previously discovered lunar meteorites, DOM 18666 and the other four fragments are pieces of the moon that can be studied in detail in the laboratory. The meteorites are from random locations from the lunar surface, and thus provide a sample of lunar geology that is complementary to those provided by the Apollo and Luna missions. The new samples are also invaluable in interpreting the wealth of images and data being returned currently by robotic missions to the moon. Scientists from around the world will be invited to request samples of the new specimens for their own detailed research.

Known lunar meteorites include rocks from the smooth dark mare (sea) regions, rocks from the bright lunar highlands and broken brecciated mixtures of the two rock types. They have extended our knowledge of the ages and compositions of lunar surface rocks, and enhanced our understanding of the geologic history of the moon. The new samples may hold previously unknown information about the evolution of the moon, and the origin of its volcanic rocks.

The U.S. Antarctic Meteorite program is a cooperative effort jointly supported by NSF, NASA and the Smithsonian Institution as part of a three-agency agreement signed originally in 1980 and renewed in 2017. Antarctic field work is supported by NSF and grants from NASA to Case Western Reserve University and the University of Utah; initial examination and curation of recovered Antarctic meteorites is supported by NASA at the Astromaterials Curation facilities at the Johnson Space Center in Houston, Texas; and initial characterization and long term curation of Antarctic meteorite samples is supported by NASA and the Smithsonian Institution at the National Museum of Natural History in Washington, D.C.

Learn more about the specimen in the Antarctic Meteorite Newsletter.

Learn more about the search for meteorites: