Two professors in the U’s Department of Mathematics—Tommaso de Fernex and Peter Trapa—have been named members of the 2019 Class of Fellows of the American Mathematical Society (AMS). The society recognizes members who have made outstanding contributions to the creation, exposition, advancement, communication and utilization of mathematics. De Fernex and Trapa join eleven other professors in the department who were previously named fellows by the AMS.

Learn about the moments that shaped de Fernex’ and Trapa’s careers, including de Fernex’ epiphany on a train that led him to pursue math instead of architecture and Trapa’s frequent visits to the math library of the Ford Motor Company, here. 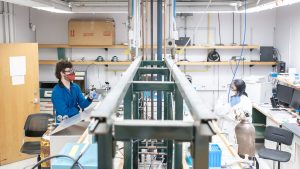