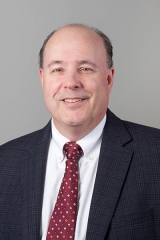 James Ashworth, M.D., was appointed as interim chair of the Department of Psychiatry at the University of Utah School of Medicine, effective July 1, 2019, and subject to usual university and trustee approvals.

Ashworth is a seasoned veteran of the department and its leadership team, having joined the psychiatry department in 2000. He has served as vice chair of clinical affairs since 2013 and, more recently, as acting chair. The appointment of Ashworth as interim chair follows the departure of Jon-Kar Zubieta, M.D., Ph.D., who served as chair of the Department of Psychiatry since 2015.

Ashworth is dedicated to excellence in all our missions and has a deep connection with U of U Health. He served as the Division Chief of Child and Adolescent Psychiatry for 10 years during a time of unprecedented expansion as the division more than tripled in size.  He has served as the Medical Director of the University of Utah Neuropsychiatric Institute since 2013. He is a graduate of the University of Utah School of Medicine. As a member of our faculty, he taught courses for both second- and third-year medical students as well as regular courses for psychiatry, Triple Board and Child and Adolescent Psychiatry residents. In 2009, he was awarded the annual resident teaching award. Ashworth is a co-founder of the GATE program which is a web-based consultation model to primary care providers and developed the Division’s Child and Adolescent Tele-Psychiatry service which allows both attending level clinicians and residents to reach out to underserved areas across the state.

The work will begin Monday, January 30, through Thursday, February 9.