Boehme joined the U in 2006 as an assistant professor. His research focuses on exploring spin-dependent electronic processes in condensed matter. The goal of his work is to develop sensitive coherent spin motion detection schemes for small spin ensembles necessary for quantum computing and general materials research.

He received the U’s Distinguished Scholarly and Creative Research Award in 2018 for his contributions and scientific breakthroughs in electron spin physics and for his leadership in the field of spintronics. 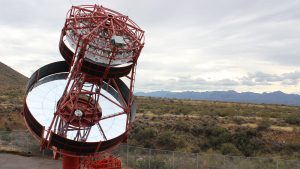