Zahi Hawass, Egyptian archaeologist, former Minister of Antiquities and discoverer of pyramids, mummies and lost cities will speak at the University of Utah’s Kingsbury Hall on Monday, December 19, 2022 at 7:30 p.m. His presentation is titled “Secrets of the Pharaohs: Pyramids, Tut, Mummies and the Golden City.”

Tickets to the event will be free and available to the public, first come, first served, here beginning on Friday, December 2. 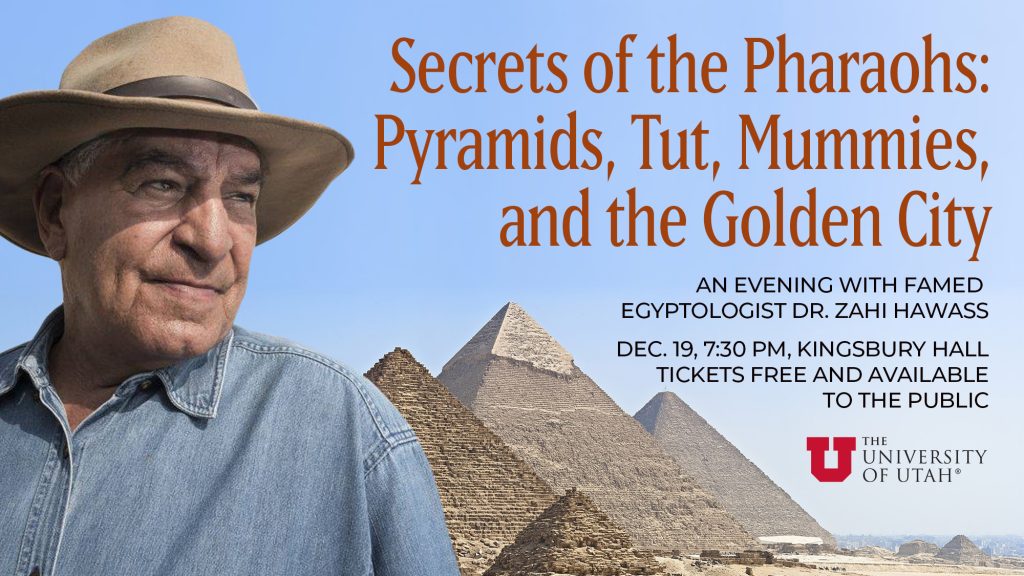 Hawass is an Egyptian archaeologist and public official, whose forceful advocacy has raised awareness of the excavation and preservation efforts he oversaw as the Secretary General of Egypt’s Supreme Council of Antiquities. He served as Egypt’s first Minister of Antiquities in 2011. Hawass received his BA from Alexandria University and his MA and PhD from the University of Pennsylvania, where he studied as a Fulbright fellow. He has made several major discoveries throughout his career such as the tombs of the pyramid-builders at Giza, the Valley of the Golden Mummies, two pyramids for Khufu and Teti and the lost Golden City at Luxor. He is the director of the Egyptian Mummy Project, using CT scans and DNA analysis on mummies to yield important results such as identifying the mummy of queen Hatshepsut. Hawass supervised an extensive site management program for Coptic and Islamic sites. He also oversaw the conservation of the Great Sphinx and built 22 new museums throughout Egypt, among them the Grand Egyptian Museum and the National Museum of Egyptian Civilization. He has received many awards, among which include nine honorary doctorate degrees from various countries and an Emmy Award for a documentary on ancient Egypt in 2006. He was chosen by Time magazine as one of the Top 100 Most Influential People for 2006. He appeared in documentaries produced by the BBC, Discovery Channel, National Geographic, the History Channel, PBS and Netflix among others. Currently, he is working with the Ministry of Tourism and Antiquities to promote tourism to Egypt. Hawass lectures internationally, sharing his passion with the world.

Members of the American Association of Colleges and Universities (AAC&U) have elected Mary Ann Villarreal, vice president for Equity, Diversity, & Inclusion at the U to serve as chair of the organization’s board of directors. The official announcement was made at the AAC&U annual meeting in Washington, D.C.

Paul Kuttner, the associate director of University Neighborhood Partners, has been named the 2023 Coalition of Urban and Metropolitan Universities-Collaboratory Research Fellow.

U students have until Feb. 14 to share their experiences around their sense of belonging at the university.

The Department of Art & Art History’s Beth Krensky is one of five live performance artists up for the 16th Arte Laguna Prize award, and one of only six Americans.

While abroad, the team will train, participate in exhibitions against Korean teams and host meet-and-greets with students aspiring to pursue an athletic career at the collegiate level in the United States.