Former chair of the University of Utah Board of Trustees Clark Ivory established the U’s most prestigious student award last year, the Ivory Prize for Excellence in Student Leadership. Nominations are now being accepted for the 2015 award.

In an effort to enhance the undergraduate experience and encourage student involvement and leadership, the prize recognizes one to two students each year with a $2,000 prize along with a $10,000 donation to the recipient’s cause. The prize recognizes students for demonstrating a positive influence on student success and/or fostering efforts that have enabled meaningful change. 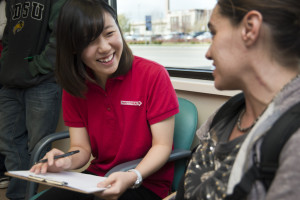 Amanda Newman was the first recipient of the Ivory Prize for Excellence in Student Leadership. Through an Honors College Think Tank course, Newman, a modern dance major, was challenged to identify a problem in the community related to health care and propose a solution. She and her team started a student-led volunteer organization called Connect2Health that acts as a bridge between underserved patients and the resources needed to lead healthier lives. During its pilot year in 2012, the program had more than 45 student volunteers, a robust partnership with Fourth Street Clinic and served more than 1,000 people.

Nominations are due by March 2 and should include a completed nomination form, a nomination letter up to two pages in length and up to two letters of support. Awardees can be currently enrolled undergraduate or graduate students or those who have graduated within the past five years.