In 1996, University of Utah professors Jim Ehleringer and Thure Cerling, along with colleagues of theirs from around the country, welcomed 18 students to the U campus to teach them about the then-emerging science of analyzing stable isotopes to learn about biology and ecology. The instructors expected that within a few years they would have taught everyone who was interested in the scientific community and demand for the course would slow.

Twenty-two years and 800 students later, “IsoCamp” has become an award-winning, internationally recognized premier training short course for scientists looking to use stable isotopes in their research. For some, it’s the highlight of their graduate studies. For others, it’s the opening of a doorway to a career in STEM fields.

Isotopes are everywhere and in everything. An isotope is just an atom that has a slightly different weight than other atoms of its element. Normally, an atom of carbon has 12 protons and 12 neutrons, surrounded by 12 electrons. Add one, or two, neutrons and you’ve got two, or three, different isotopes. Each is still carbon, but is now designated by its number of neutrons: carbon-12, carbon-13, or carbon-14. Neutrons don’t weigh that much – it would take 600 quintillion of them to equal the weight of a fruit fly –  but that difference in weight between atoms matters. More on that in a minute. 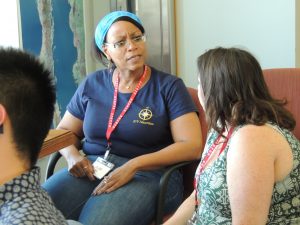 A student talks about her research with Isopope Ruth Blake of Yale University.

Stable isotopes are those that don’t change weight with time. They’re, well, stable. In contrast, radioactive isotopes feel unbalanced by their mix of neutrons and electrons, so they decay in order to get to a more comfortable state. You have both stable and radioactive isotopes in your body right now. (Much more of the former than the latter, by the way.)

How can this tell us anything useful? Imagine the open ocean, with the sun beating down and water vapor wafting up into the sky. The molecules of water with lighter isotopes of hydrogen and oxygen are more likely to evaporate, leaving heavier isotopes behind in the ocean. Now the water in the clouds has a different isotopic signature than the ocean – and you can tell whether a sample of water came more from one source or the other.

Expand that concept further, and you’ll find that water samples from different parts of the country contain different ratios of isotopes, depending on their distance from the ocean. As we drink that water, it becomes part of our tissues, including our hair. Using isotopes, it’s entirely possible to retrace aspects of your travel history just by analyzing a strand of your hair.

It’s that and an innumerable set of other possibilities that inspired Ehleringer and Cerling to launch IsoCamp. At that time, biologists had just begun adapting the isotope analysis techniques that geologists had been using for years. “I think we had the first or second instrument that was available to a biologist,” Ehleringer says. “After about the third year, applications continue to increase and showed no signs of tapering off. It was clear that we’d met a need that couldn’t be met elsewhere.”

“It’s overwhelming, it’s a little bit exhausting, but in a really positive way, even though you’re exhausted and your brain is tired, you can’t get enough of it.”
Katie Wedemeyer-Strombel (’15)
Doctoral candidate, University of Texas-El Paso
El Paso, TX

Today, IsoCamp welcomes 35 new participants (“isotopeteers”) to the U. campus for two weeks each June. Cerling says that typically more than 100 people apply, and participants are typically doctoral students whose research will involve stable isotopes. 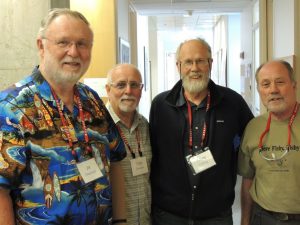 IsoPopes from 1996 through 2018 (left to right): Jim Ehleringer, Todd Dawson of U.C. Berkeley, Thure Cerling, Craig Cook of the University of Wyoming.

The camp consists of lectures and group research projects, guided by Ehleringer, Cerling, and 17 other instructors. Only six in 2018 were from the U, with the rest coming from across the country; from Yale University in the east to the University of Hawaii in the west. “Quite a number of the faculty have been involved for more than 15 years, and a few for more than 20,” Cerling says. “They, too, must be getting something out of the course!”

The isotopeteers come from even farther. Last year’s class included students from Brazil, Lebanon, Slovenia, South Korea and Israel. This year’s included students from Egypt, Italy, Bolivia and Australia. In total, participants have come from 37 countries. Very quickly, however, the students become fast friends. Students recall Ehleringer’s admonition to the group at the start of the camp. “You’re in a room with 40 new friends. We are all now a network. We are all now friends and we are all here to help each other.”

Isotopeteers work in small groups to do stable isotope research projects, learning how to do all phases of the project: designing the experiment, collecting and analyzing the samples, and presenting the final result. “They’re learning the fabric of how science works in a collaborative interdisciplinary way, and the role of a team,” Ehleringer says.

Outside of the course projects, students connect with instructors for advice on their own research projects. “They didn’t want any authorship or any credit,” says IsoCamp alum Katie Wedemeyer-Strombel. “They just wanted to help me be successful.”

That drive to help students succeed carries over into the diversity of the camp, both in the participants and in the instructors. “Our instructor population and our student population look more like the world today,” Ehleringer says. Sixty percent of participants are women. A quarter come from groups underrepresented in science. Around 90 percent of IsoCamp participants stay in STEM fields. Some have returned as instructors. And two have been elected to the National Academy of Sciences, of which Cerling and Ehleringer are also members.

“It was daunting as an undergrad, but it led to an internship with a fellow isotopeteer using stable isotope analysis at the USDA Forest Service and then a Technician position at the University of Hawai’i. It has been so positive in my STEM career and I hope more undergrads participate in the future.”
Jon Kuntz (‘16)
University of Hawai’i/USFS Field Technician
Hilo, HI

In 2013, U. geology & geophysics professor Gabe Bowen launched a companion two-week short course, SPATIAL (Spatio-temporal Isotope Analytics Lab) to meet the needs of researchers whose questions encompassed more than a single study or field site. SPATIAL teaches participants how to manage large data sets, analyze data with spatial and statistical tools, and carry out computer modeling. “Each year I get to meet talented new students and faculty, reconnect with colleagues, and engage in two weeks of creative learning,” Bowen says. “As an added bonus I get to follow all the amazing things these students do after they graduate from SPATIAL.”

Both camps are about creating an interdisciplinary community, he says. “We hope, and the track record would suggest, that this grows the connectedness of the scientific community, helps our students build their identity and sense of belonging, and promotes innovation through the exchange of ideas between groups.”

Ehleringer agrees. “They get exposed to different areas and concepts that they wouldn’t otherwise, and that’s important because people don’t know exactly where they are going or what collaborations might develop.”

Part of the community is the camp’s lingo, with a sort-of hierarchy. Students enter as “isotopeteers.” Instructors are affectionally dubbed “IsoPopes.” Ehleringer and Cerling even have miters. The highest rank, “IsoBard,” is reserved for the late John Hayes of Woods Hole Oceanographic Institution, stable isotope pioneer and former IsoCamp instructor.

In December 2017, Cerling and Ehleringer were awarded the Excellence in Earth and Space Science Education Award by the American Geophysical Union. “Students advance rapidly from tentative newcomers, fueled by lectures, discussions, and growing experience in the field and lab,” the citation reads. “By the second week, students have gained the ability to envision their own projects and decide how best to apply an arsenal of available isotope methods and have built a lasting esprit de corps as they scramble to complete their projects before presentation.” 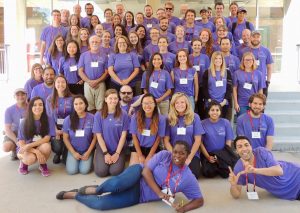 “This model could and should be more popular across campus,” Ehleringer says. The lectures are open, he says, and U faculty and students can attend as many as they’d like. Going forward, the IsoPopes hope to expand their ability to offer travel fellowships for international students. “We’ll always be able to fill the course, Ehleringer says. “But we’d like to maintain the diversity that we’ve been able to achieve.”

“[IsoCamp] stands out as one of the great experiences I’ve had in my journey through science,” says Ford Ballantyne IV, an associate professor at the University of Georgia and IsoCamp attendee in 2008. “The experience that you created has had a significant influence on the way I ask and approach questions, and really opened up a new world of science to me.  I feel so lucky to have been a part of it.”

Feedback like that, Ehleringer says, “makes us feel warm and fuzzy all over!”