A University of Utah graduate who went on to become a trial lawyer, Parker watched disparities in who could access legal help as the first few years of his career unfolded. For those with money and resources, navigating the law is no problem. But for those who fall on the lower end of the socio-economic spectrum, legal resources are often unattainable and people instead are left to try to understand complex legal issues on their own, Parker discovered.

The paradox led Parker to create CO/COUNSEL, a new Wikipedia-like website designed to help the general public more easily find legal information. He created a crowdsourced platform, which weaves research into one coherent visual map of the law, giving its users access to different pieces of logic related to an area of the law. For example, users can choose a legal topic such as “patent law” or “information 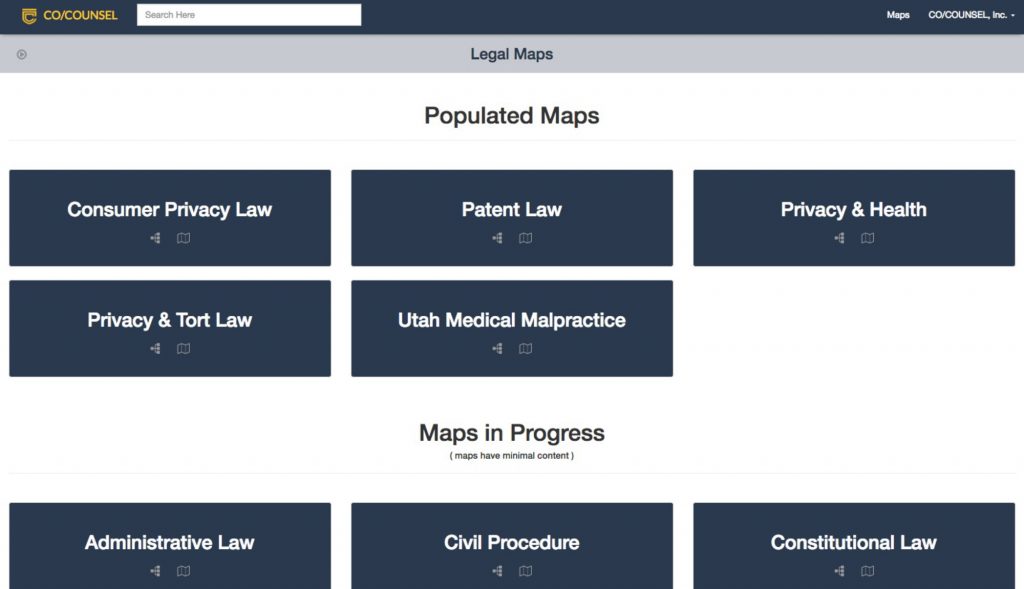 “People don’t have the time or the training to piece together the logic of the law themselves. Those who can afford an attorney, pay hundreds of dollars an hour to understand their legal rights. Those less fortunate have few options,” said Parker. “It’s a serious social justice issue.”

The website is free and is powered by contributions from law students and other legal professionals. Because the content on the site is contributed by the legal community (and regularly vetted by CO/COUNSEL) users are ensured that the information is accurate. Users can flag content if they spot a definition they deem concerning and the information is quickly reviewed and edited if necessary. The website is not anonymous, Parker noted, and contributors receive credit for the research they post — an aspect that can be helpful to law students hoping to use the experience on internship applications down the line.

The student participation element of Parker’s creation serves as an innovative educational tool, said professor Randy Dryer, who teaches information privacy law at the University of Utah S.J.  Quinney College of Law. Dryer, who met Parker through mutual acquaintances at a law firm, experimented with having his students create content for CO/COUNSEL during the past semester and it’s a practice he plans to continue in the future. The University of Utah is among the first universities in the country that Parker has paired with to have students “map” legal content for the website.

In an age where law school still tends to be driven by old school lectures and reading, integrating Parker’s project into their course curriculum is one way professors are reshaping how to deliver content in an era where law school education needs to transform to the digital age, Dryer said.

“It’s very innovative. This is kind of the digital version of Cliffs Notes that deals with different areas of the law,” said Dryer.

“What he has done is taken different areas of the law and mapped them in a way to make it accessible. By getting law professors to use this tool as part of their pedagogy in class, this provides an option for students to be engaged in a more interactive way,” Dryer said. 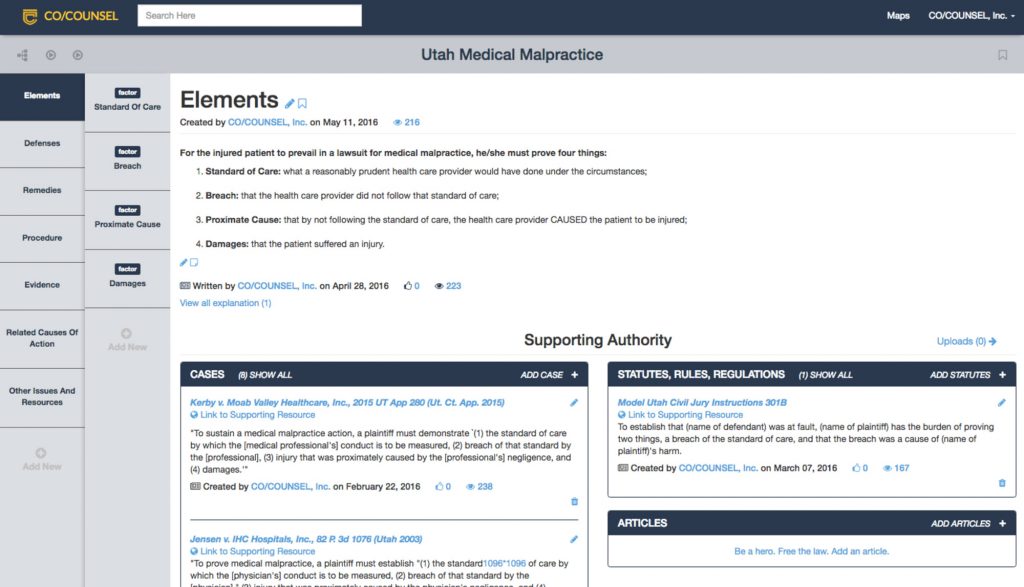 This week Parker and Dryer launched three maps relating to privacy law created by Dryer’s class. The information is now public and is viewable in CO/COUNSEL’s “column mode” and “mind map” format. The mind map allows users to see the logic of the law in a flowchart. The column mode allows users to browse the legal authority that support each branch of that logic.

Vikrant Deshmukh, who recently completed Dryer’s course and documented areas of information privacy law on CO/COUNSEL as part of the coursework, said playing a role in creating the new legal wiki was a valuable learning experience.

“I found CO/COUNSEL much better at presenting information in a concise, yet structured manner, compared to other formats. In particular, I found the ability to document relevant snippets of all the references related to statutes, articles and especially case law (in their own, dedicated formats), to be very useful. The final structure — if the author followed the format naturally presented by CO/COUNSEL — presents the law in an easy to read format,” said Deshmukh.

“Not only did I learn a lot compared to other courses with traditional formats, but I have been able to carry over these skills effectively into other areas as well,” he said.

The skills Deshmukh acquired through the project and in Dryer’s class have helped him at a summer internship in the University of Utah Health Care Privacy Office, where he’s analyzed legal issues related to health care HIPAA rules.

CO/COUNSEL has resulted in recognition for Parker and Dryer, who were named as a Fastcase 50 recipient, an award given out by a notable legal research website to “the law’s smartest, most courageous innovators, techies, visionaries and leaders.” The award honor Parker for making the law “more accessible and understandable” and Dreyer for “incorporating technology in his course pedagogy” through the use of CO/COUNSEL and other digital efforts.

Parker, who relocated to Utah after his experience as a trial attorney in the Bay Area for law firm Quinn Emanuel (he’s now a lawyer at Parsons Behle & Latimer in Salt Lake City), hopes to grow his project even more in the future. He moved back to Utah, where he graduated from the U with an English degree in 2009, to focus on building the site and so he could work on systematically mapping the entirety of Utah law over the next few years.

“Our goal is to make Utah’s laws the most transparent in the nation. We’ve already started and and results have been promising. We want Utah citizens to be able to visit our site and understand their legal rights,” said Parker.

“We are hoping the legal community will help with the effort. Utah lawyers and law students have mapped large portions of the law already for motions and memos. We want to aggregate that content and make it public, to the extent it’s not confidential. We’ve already spoken with some judges about publishing their decisions on the site. And all of the content will be free to the public.”

Parker noted his experience as a University of Utah undergraduate (he is also a graduate of the University of Chicago Law School) — where his mentors included well-known English professor Brooke Hopkins — helped prepare him to become a legal entrepreneur today. He said he’s excited to contribute to his alma mater by offering a learning opportunity through CO/COUNSEL.

“So many of my professors and classmates at the University of Utah have done amazing things to help the community. It’s inspiring. I want to help by making the law easier to understand,” said Parker.