In a valley notorious for gunky air, how do you weave transit, biking, carpooling and other air-saving measures into residents’ everyday lives? One approach is a challenge like the Salt Lake Chamber’s Clear the Air Challenge, with some participating teams offering incentives and prizes to encourage trip-saving behavior. But how do you sustain people’s use of alternatives to single-occupancy vehicles once the challenge is over?

It may be that internal motivators, instead of external motivators, create long-lasting behavior change, say University of Utah postdoctoral scholar Robert G. Kent de Grey and psychologist Carol Werner in a paper published in Transportation Research Part A. People who make alternative transit fun, interesting or productive are more likely to continue that transit mode long-term. The results, the authors say, may inform how future challenges are structured.

“Whatever you do, you need to catalyze the creation of intrinsic interest if you want results to last beyond the scope of the challenge itself,” Kent de Grey says.

Kate Lohnes, formerly of the Salt Lake City Department of Sustainability and the Environment, was also a co-author of the study.

For four weeks in February 2018, people all over the Salt Lake Valley biked, rode and carpooled as part of the Clear the Air Challenge (previous years’ challenges were held in the summer). Since the annual challenge began in 2009, participants have eliminated nearly a million single-occupancy vehicle car trips and saved nearly 5,000 tons of carbon dioxide emissions.

The U’s Sustainability Office offered prizes, including a dinner with campus leaders, to top participants. But if such external, or extrinsic, motivators draw people into the challenge, will participants keep using transit once the challenge is over and the prizes are gone?

“There’s a growing idea that intrinsic motivation is what builds durable attitudes that resist persuasion and that can lead to lasting behavior change,” Kent de Grey says. “Unless you find value or interest in something, or have that conviction that it’s the right thing to do, eventually people will get tired of doing it.”

To assess the psychological underpinnings of participants’ activity in clean air challenges, Kent de Grey and Werner surveyed 197 participants in the 2012 Clear the Air Challenge and assigned them randomly to receive one of three interventions, experiences designed to influence behavior. The three interventions invited participants to ponder and express, in different ways, their reasons for joining the challenge. “The more you think about it and mull it over and convince yourself that you really want to do this, then you’re more likely to maintain the behavior,” Werner says.

Kent de Grey reports that participants in all three interventions completed the challenge at about the same rates. But they also assessed participants’ continued attitudes about alternative transit two months after the challenge ended—and at that point, people’s attitudes toward transit were correlated to their ability to create their own intrinsic interest in the activity—to make walking, riding, biking, carpooling or telecommuting productive, interesting and fun.

“You can maybe pick just about any intervention you want,” Kent de Grey says. “But the magic that is hiding behind each of these intervention strategies appears to be that harnessing of intrinsic motivation.”

“An aid to walking”

Amy Brunvand, an associate librarian at the U’s J. Willard Marriott Library, wrote a 2016 essay explaining how she finds intrinsic motivation for riding the bus to work. “It’s a mistake to think of a bus as kind of a large inconvenient car that doesn’t go when or where you want,” Brunvand writes. “The best way to think about bus riding is as an aid to walking.”

Brunvand says she has been a bus rider “since I was too young to drive,” and views walking to the bus stop as a way to become more connected to her neighborhood. “I look at that time as an opportunity to not be at work,” she says. “The time is what’s valuable to me—the time when I don’t have something on the schedule. That’s time to think.”

Kent de Grey and Werner view Brunvand as an example of harnessing intrinsic motivation. “She’s going to take the bus for the rest of her life,” Kent de Grey says.

Helping get the ball rolling

Another result arising from Kent de Grey and Werner’s work was a disincentive to continuing transit use: strong employer pressure to join the Clear the Air Challenge. “Forcing people to do these challenges may be counterproductive,” Kent de Grey says. “Those are really good intentions on the part of the bosses, but good intentions aren’t enough. You have to have good results as well.”

The researchers are next hoping to study the best ways to create intrinsic interest, including the relative effectiveness of hearing pro-environmental and pro-transit messages from either friends or the university sustainability office.

“You get people to a point where they are determined to succeed,” Werner says.

Kent de Grey adds, “There’s magic in what the commuters can do once the ball gets rolling.” 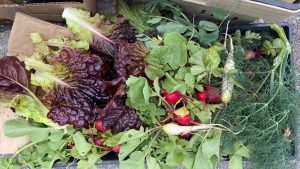 Growing food and community in a pandemic
September 3, 2020 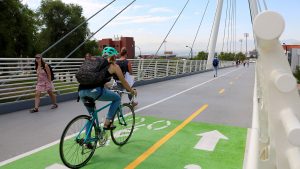 U logs more trips than any team in Clear the Air Challenge
March 11, 2020