Thinking about living at Lassonde?

Sure, there’s the free coffee.

But when you talk to students who live at Lassonde Studios about what makes it a great experience, the thing that comes up over and over is the people.

Few places on campus offer a comparable opportunity to mingle with students from a wide-range of disciplines or to be exposed to the kind of creative thinking that results in the Next Big Thing.

That’s what is at the heart — or more accurately, ground level, of Lassonde Studios.

The Studios are an extension of the Lassonde Entrepreneur Institute, an interdisciplinary division of the David Eccles School of Business. The institute has offered entrepreneurial programs since 2001.

Lassonde Studios, a five-story student housing and innovation building that has garnered national recognition since its debut in 2016, provides an immersive experience for its 400 residents as well as creative work spaces for all U students. That doesn’t mean you have to have to have a business idea or be a budding entrepreneur to live or get involved at Lassonde, as you’ll see. But an open, curious mind is a plus.

Here are four stories about what it’s like to live at Lassonde: 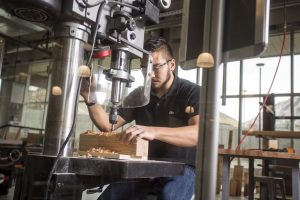 Let’s start at the ground floor — in the Neeleman Hangar, where the Make space occupies the entire east side of the building. This is where you are likely to find Danesh Ajioka.

Ajioka, a sophomore from Salt Lake City, is student director of the Make program shop. He manages all the tools and equipment, from filament for the 3-D printers to wood for craft projects, and makes sure the shop is working safely, smoothly and sustainably.

He lives on the second floor, the Sustainability & Global Impact floor, in a loft with three roommates. Ask Ajioka why he wanted to live at Lassonde and three themes emerge: Diversity. Active inclusion. Passion.

“You get to see and interact with a lot more people from more backgrounds than you would typically on campus,” said Ajioka. “It is full of ideas and new ideas because people have very different ideas on things, which is awesome.”

Take his own experience. As a kinesiology major, Ajioka would have little opportunity to cross paths with students seeking other degrees. Not so at Lassonde Studios, where Ajioka has become good friends with a student majoring in engineering whose advice he often seeks out on projects.

“We’ll talk about 10 different ways I could solve a problem,” he said.

Among the projects Ajioka has seen take form at the Make shop: a sled, a wakeboard, skis, ski racks, an intricate jewelry box. “It’s amazing to see how much wood we go through,” he said.

Lassonde Studios is open to everyone enrolled at the U and the more participation that comes from across campus, the more creative and innovative the ideas become Ajioka said.

“When that happens, everyone is much more successful.” 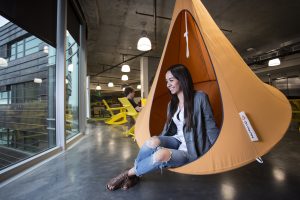 Eden Renee Wairepo was a sophomore at Utah Valley University when she heard Troy D’Ambrosio, executive director of the Lassonde Institute, speak at an economics conference. At the time, she was looking for a new challenge.

D’Ambrosio’s remarks about Lassonde and its goal of helping students focus on big problems, to meet a need and come together to inspire each other resonated for Wairepo.

“I found my new challenge,” she said. Wairepo, who is originally from New Zealand and graduated from Mountain View High School, transferred to the U soon after. She completed a bachelor’s degree in economics this fall and is now beginning a master’s in finance.

Wairepo is one of three resident advisors in charge of the Adventure & Gear, or fourth, floor.

“My role is to make sure the people I live with are set up to succeed,” she said. “One thing I am passionate about is helping people, whether that is helping residents find what they are interested about or teaching the importance of education or what they want to do after they graduate. Working with people is what I’m good at.”

She also was a student associate for the 2017 High School Utah Entrepreneur Challenge, a “really cool experience. What high school students are coming up with is inspiring.

“This building is able to bring together people who are like me, who are wanting to do good in the world and in college. That is exciting,” Wairepo said. “Once you get a bunch of really smart people together, it’s going to be extremely innovative. 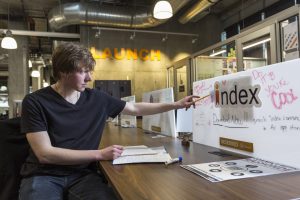 Once Taren Rohovit heard about the new Lassonde Studios, there was no question where he wanted to live during his freshman year at the U.

“I got invigorated with the spirit and the motivation of the people who would be there,” said Rohovit, who grew up in Salt Lake City. And, “It had features none of the other dorms did.”

Like free access to 3-D printers. And the 24-hour Miller Café, which is handy when inspiration strikes at 2 a.m. and you need a snack to power you through a creative moment.

That’s how it worked for Rohovit. During his freshman year, he was meeting “tons” of people — in classes, group projects, at the gym — and was frustrated trying to find and keep track of them all on various social media platforms.

“I figured there had to be a better way of doing it,” said Rohovit, who is majoring in psychology and minoring in computer science.

And so Rohovit and his business partner Mathew Beseris, a computer science major, are inventing an app for that. It’s called Index and you can find it on iTunes (Index: Connect Everything by Index, LLC) and, soon, the Google Play store. Learn more about it here.

Rohovit returned to Lassonde for his sophomore year; he lives on the fifth floor, which is designated as the Games & Digital Media floor. Through Lassonde’s Company Launch program, Rohovit also has an office — an open desk in the Hangar — to work in and collaborate with other students. He’s also been able to get some initial seed money.

“Lassonde has so many resources and I don’t know if enough students realize what’s available and participate as much as they should,” Rohovit said. “Even when I started Index, I didn’t initially realize all the opportunities there.”

In fact, he credits the environment at Lassonde for getting the creative thoughts flowing that led to his business idea.

“Without it, I would never have gone in that entrepreneurial direction,” Rohovit said. “I’ve met so many people I never would have met outside of Lassonde. There are totally different disciplines and personalities and Lassonde is the only place we could have come together.” 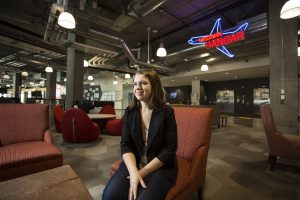 Intrigued by the idea behind Lassonde Studios?

So was Cynthia Grissom. The Salt Lake native liked the idea of being in a collaborative, creative environment where she would be surrounded by people with an entrepreneurial mindset and a shared passion for learning and innovation.

“I wanted to see what that was like,” said Grissom, who spent her freshman year at Lassonde.

And? “I absolutely loved it,” she said — so much so she is back at Lassonde this year.

“The studios offer so many opportunities to meet new people, learn new skills and develop your own thoughts and ideas,” said Grissom. “During most hours of the day, you could walk into the Hangar and see people producing various projects in the Make space or working in the company launch area. More often than not, the people working in these areas are eager to share and talk to you about what they are working on because it excites them to share their ideas with others. During your conversation, you will learn about their passions but also about your own because in the process of sharing knowledge and information, you are learning more about the world around you.

“The design of the building is to bring people together, all these different communities. It forces you to get to know people who are not just in your little world,” she said. That said, “you do have to make an effort and reach out to others in order to truly experience the benefits of the building.”

And students like Grissom are available to help you do just that.

Grissom, a double major in communications and psychology, is a student associate in the Cowork program. She facilitates student networking, provides building tours and serves as a “walking information desk.”

The ability for students to take ownership in their living space and interact closely with staff is one of the benefits of living at Lassonde — and in Grissom’s case has led to an interest in a student affairs career as a result of working closely with the building’s area coordinator.

“Absolutely do it,” Grissom said. “It has been one of the most rewarding experiences in my college career. It has led me to become a social person and also to figure out where I want to go. I’ve been inspired by all these different people and have been able to explore other areas of study without actually having to take a class because of being exposed to people in different majors.”

Great fitting jeans for everyone
January 28, 2020